Smoke on the water

On September 5 2012 some smoke could be seen rising fom the Fessenheim Nuclear Power Plant in France. Obviously this drew a sizeable swarm of journalists, all waiting for a disaster to strike. When it became finally clear that nothing big was going to happen everybody went home and carried on with the next slightly significant piece of news. But what was this fuss all about anyway? 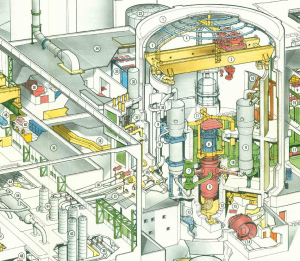 During the planned maintenance outage of a Nuclear Power Plant the steam generators (#6 on the picture above) are partially filled with water.  Note that this only takes place in the secondary circuit and the water thus does not come into contact with the core fuel. To prevent rusting some hydrazine is added to this water, which removes oxygen:

Before restart this steam generator conservation fluid is drained. However before these effluents can be discharged into the environment hydrazine must be removed by a chemical process. This process is performed in the auxiliary building (#34 on the picture). This is usually carried out by means of hydrogen peroxide, with a modicum of copper sulfate to speed up the reaction: 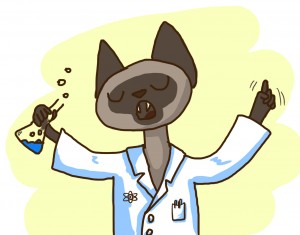 This decay is exothermic, and furthermore catalysed by… copper sulfate. With that piece of info everything soon clicks into place: adding solid copper sulfate into the solution initiated the hydrogen peroxide decay and produced heat. Since the hotter the temperature the faster the reaction the latter quickly went haywire and gave off steam massively.

However one is left scratching its head as to why such an incident had never occurred before since this reaction seems fairly basic, and especially why the dissolution process did not take this chemical risk into account. This is actually the main issue that is being discussed by the french Nuclear Safety Authority in its Lettre de Suite d’Inspection towards EDF.

What you will need:

As usual with chemical experiments exert some caution while handling the reagents, especially hydrogen peroxide which can be quite caustic, and protect yourself appropriately (glasses, gloves).

The recipe is dead simple: pour the hydrogen peroxide into a beaker then sprinkle with copper sulfate. After about 20 minutes you should get something like this:

The green-maroonish colour is likely caused by the presence in the solution of copper with oxidation states I and II. The greenish Cu(II) catalyst is of course regenerated during the hydrogen peroxide decay. However this chemical reaction also involves the temporary formation of reddish Cu(I), hence the mixed solution colour.

One Response to Smoke on the water